A Brief Introduction To The Book Charkha

Around a year ago, I became the owner of a beautiful little spinning wheel - the Indian Book Charkha.  Gradually over the course of a year, I've slowly come to know this tool and have learnt to use it to create yarns that I like.

First, let's have a little history lesson!  Around the time the charkha was invented, India was under British rule.  The Indian climate was great for growing cotton which then got sold to the British who would spin it up and weave it into cloth.  The British then sold the cloth they made from the cotton back to the Indians at a much higher price (obviously) which they just couldn't afford.  At this point, along comes Gandhi.  He encourages the men and women to spin and weave their own cotton so that the Indians can regain some of their independence.  But he needs a portable tool to take around with him to demonstrate his spinning.  There are various versions of the story I can find from here.  The first is that Gandhi designed the Charkha and the second is that Gandhi held a contest and the Charkha was the winning design.  Either way, we now have a fabulous tool that we can use!  (By the way, Charkha is actually just the Indian word for wheel!)

Nowadays you can get a couple of sizes of Charkha's although they all work following exactly the same principles.  Firstly, there are generally two well known sizes and one which I've only seen on one website but I'll mention it here anyway.  The two main sizes are the Book Charkha (smaller) and the Box Charkha (larger, also known as the attache or briefcase charka).  I've also seen a size classed as a Travel Charkha which is inbetween these sizes. 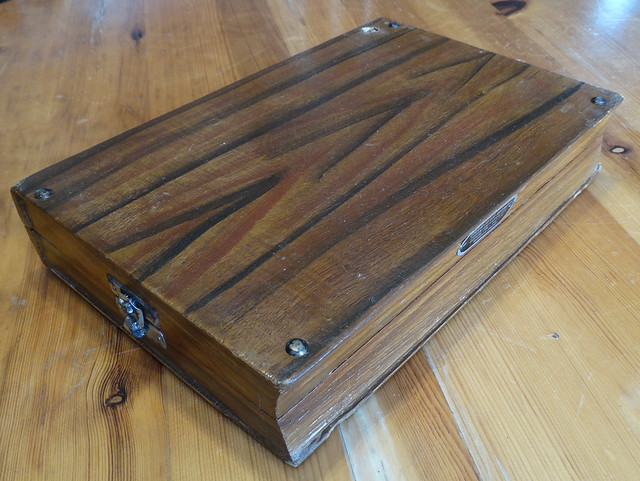 So my charkha is a Book Charkha and was purchased at Cotton Acres.  According to the website, it is made of teak.  It isn't very heavy and is traditionally used sitting on the floor, although as I'll explain later, I've worked out a method such that I can use it on a table.  Here it is all opened up (but not set up yet):

The left hand side contains three spindles, the metal arms for the skeiner, the small drive band, the spindle support and the eyelet for the skeiner. 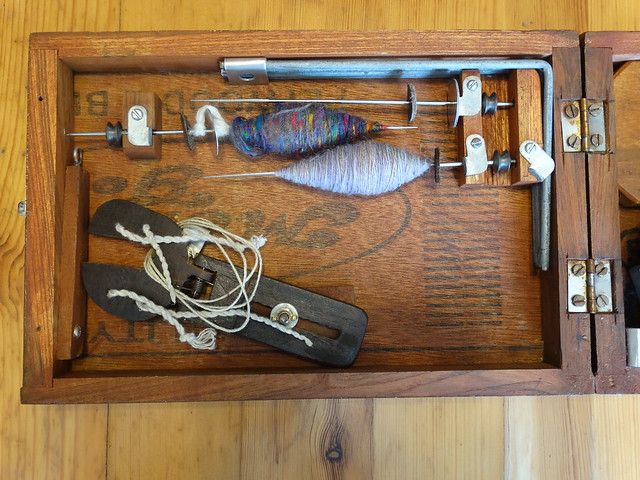 The right hand side contains a large wheel, a small wheel (and their bases), the skeiner base, the metal handle and its wooden knob and also the handle that you use to keep it steady while spinning. 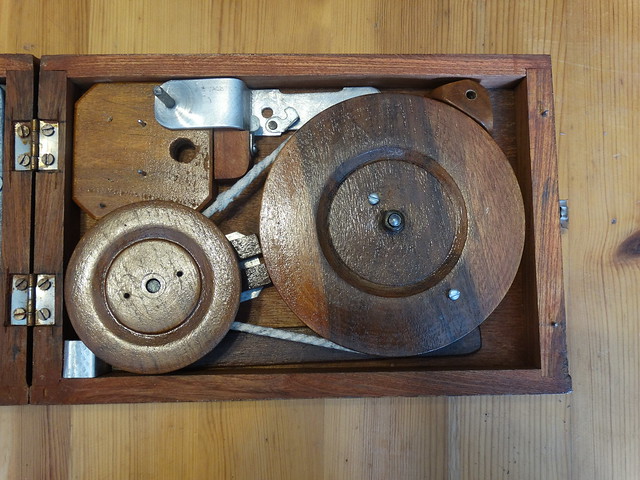 My charkha didn't come with any instructions so a combination of logic and the internet helped me get it set up correctly!  First, you take all the pieces out and try to identify everything... 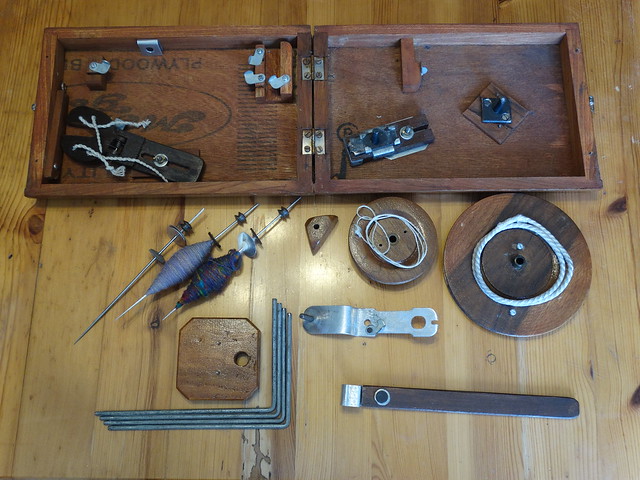 Then you set up the right hand side with the large wheel and small wheel connected together with the large drive band.  There's definitely a knack to doing this which took me quite a while to work out!  The band is a very thick cotton so I suspect I could probably make a replacement should I ever need to!  (As a note, in this photo I've returned the skeiner base to its stored position, we won't be using that till we've made some yarn!) 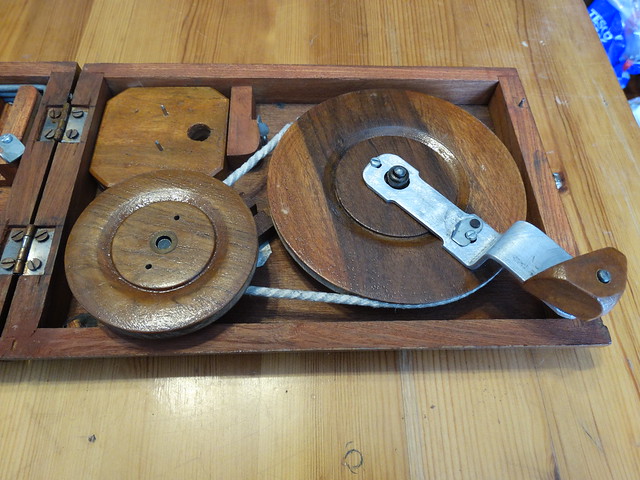 Then you set up the left hand side, connecting the small wheel on the right with the little pulley on the spindle itself using the small drive band.  The original drive band that came with the wheel did break so I've already made it a new and I can confirm its easy to do!  I just tightly plaited some cotton embroidery thread and tied it in a knot.  The spindles each have a leather disc and a metal disc.  I couldn't find any advice on what to put where, but I've found that the nicest way to spin is with the leather disc going between the upright wooden arm (nearest the yarn) and the pulley to act as a washer.  The metal disc then goes between the yarn and the wooden arm (like a whorl on an ordinary spindle).  However, in this photo, I forgot about the metal disc before I started spinning so I'm using the leather disc as a whorl and carefully setting up the spindle support so that the pulley doesn't rub too much. 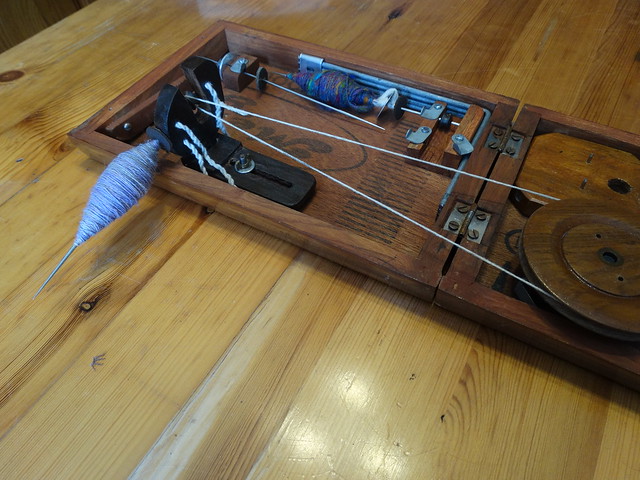 So here we are, all set up and ready to spin!  Finally, if you're doing it the traditional way, you'd be sitting cross-legged on the floor.  You sit the charkha on your right hand side and basically either sit on the handle or use your foot to hold it steady.  The handle to turn the wheel should be approximately at your hip apparently.  However, sometimes I much prefer to work at a table so I got a couple of wood working clamps and I firstly clamp the handle to the table in about the position its shown in the next photo and I also add a second clamp into the top left corner of the box (as the charkha is oriented in the below photo).  This makes it convenient to take along to social craft sessions without worrying about it sliding about everywhere.  (There are many ways to achieve this, this is just what works for me, lots of people find that non-slip mats also work very well). 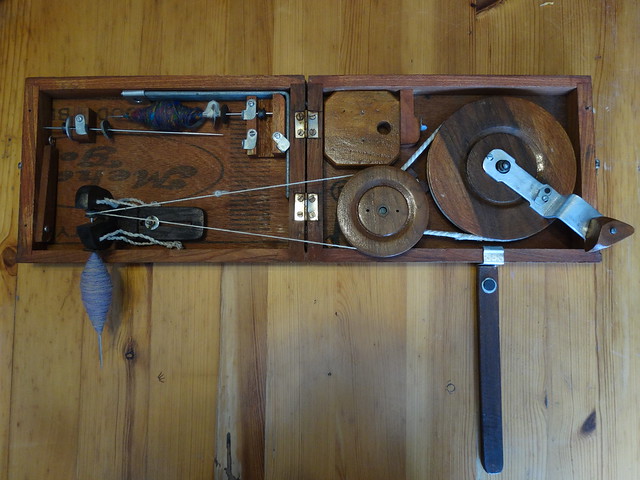 How The Charkha Works

Its basically a simple pulley simple.

We've successfully got the spindle going round!

What To Spin
(Disclaimer: if you don't know much about spinning this section probably isn't for you, but go ahead, read it anyway!)

The charkha has an amazingly high spinning ratio (the website claims 100:1 - that means the spindle goes around 100 times for every complete turn on the handle - but I've never tested it).  This means it puts a lot of twist into the fibre really quickly.  This makes it ideally for spinning long draw style with short staple length fibres.  This is pretty convenient, because it was designed to spin cotton - which is very short staple length (about an inch) and is much easier to spin long draw (at least, I find it is).  You can spin cotton in a couple of different preparations on the charkha - from a puni (which is a tightly rolled rolag, easiest made using a set of carders) or just straight from the 'fluff' that you'd get off the plant (after you've taken out the seeds and any extra stuff that's snuck in).  Using these ideas, you can also spin pretty much anything with a short staple length - including protein fibres, particularly those luxury ones such as angora, cashmere, yak and camel to name a few.

With patience, it is also possible to spin long staple length fibres too!  The yarn below is a lovely merino wool blend.  I'm spinning straight from a combed top.  This means it takes longer than if I was doing it in the traditional style, but its getting me the result I want which is the important thing.  I'm doing this by essentially using the equivalent of the 'park and draft' method that I teach people when they start using a drop spindle.  I start off with a leader yarn.  I build up some twist in it.  I join my fibre and use a short backward draw, remembering to keep the twist out of the drafting area by pinching the yarn.  I draft only a couple of inches at a time and I do that until I no longer have enough twist in the yarn and then I either add more twist and start over again or I'll add enough twist for the project I'm making and then wind on (I nearly always make plied yarns so I over-spin my singles because I want the plied yarn to be balanced, not the single).  I've also had success using the long-draw method with long staple length fibres.  The best preparation for this is a rolag and remember to turn the wheel really slowly! 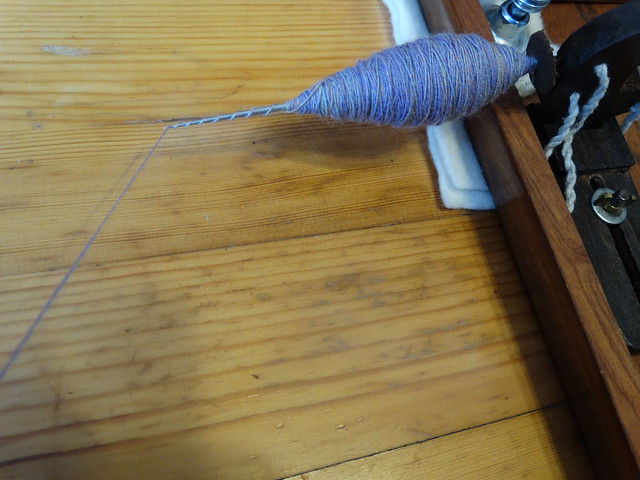 Once we've spun a spindle full of yarn, and perhaps even plied it.  We can make a skein!  Thankfully, the designers of the charkha thought of this and there's one built in!  The skeiner base (the square block) has two little pegs on the bottom that slot into two holes on the small wheel.  Its also got 4 holes, one in each corner, that we push the metal skeiner arms into.  There is also a hook on the far left of the wheel which can be brought upright and the first bit of yarn goes through the hook and is simply tied onto one of the arms.  We then turn the arms around (doesn't matter which way) and carefully unwind our spindle onto the skeiner as if by magic!  Then to make a skein, take it off the skeiner, put both thumbs in the loop and hold it tightly open.  Then twist it round (at one or both ends) until it feels like you can add no more.  Then bring your hands together and let the skein fold up and twist round itself.  Finally, remove your thumbs and tuck one into the other and admire your nicely made skein!

Here's an example of the skeiner in action (using a yarn that I didn't spin on the charkha, but it was ready for skeining when I was taking photos!). 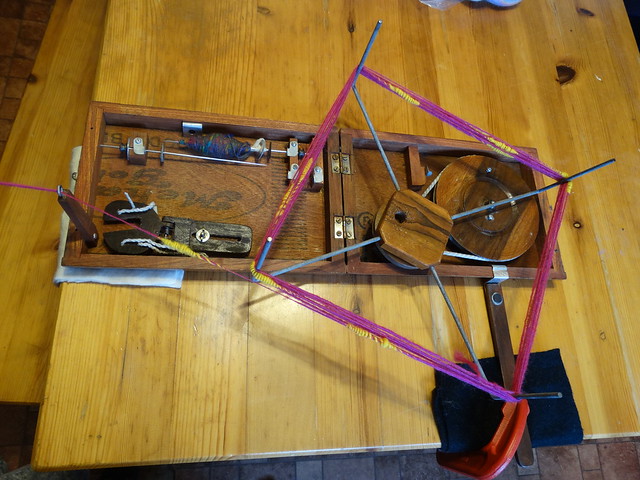 Some Examples of Charkha Spun Yarns

Silken-Yak-Paca - a luscious blend of silk, yak and alpaca (purchased from Hilltop Cloud) 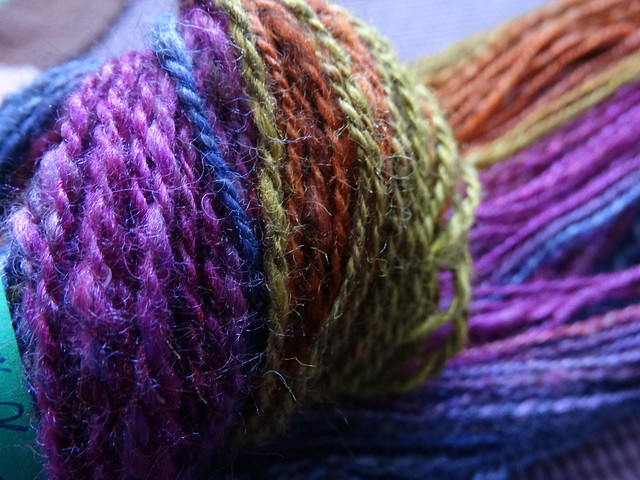 Camerino - a camel and merino mix (purchased at Wingham Wool) 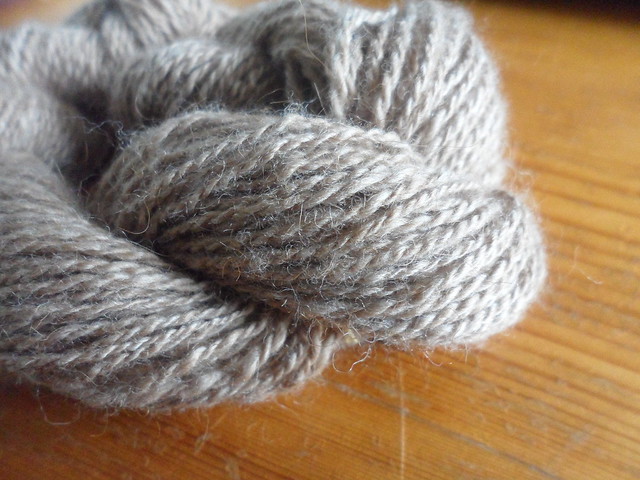 I hope you've found this an interesting blog post to read, its a post that has been a long time in the writing and I thought it would be nice share some information on setting up and using the Book Charkha, as when I first started I found it really hard to find all the information I needed!  But until next time, happy crafting!