It's me, Basil, back to write my diary again.  It's been a little while since my last post as something terrible has happened.  My big brother Pumpkin has unfortunately passed away.  I don't know exactly what the problem was, but he kept having these moments where he had a seizure and didn't remember anything of what had just happened.  My poor brother was very confused after them but soon remembered me and we continued as usual.

However this time, it was really long and really scary.  So scary that Mummy had to take him out of the cage to stop him hurting himself, but it was too late and nothing could be done.  Mummy and Daddy were very upset and Mummy accidentally got some of her tears on me and I had to wipe them off.  It is very strange being an only mouse now.  It's much quieter and it means I get to spend even more time with Mummy and Daddy.  It's also nice to have the cage to myself and I'm getting used to it pretty well now.  I quite like my big cage.  Mummy cleaned it out the other day and I got a new cottage to nest in!  It's so cool!  It's covered in bark and has some cute windows and a mouse-sized doorway.  I love chewing on the bark, I think that's why Mummy bought it for me.  She said it was an early 6-month birthday present.  I'll be 6 months old in a few days time - how exciting!  I hope Mummy gives me an extra treat or two to celebrate!

It's now time for me to go and sleep as the sun is still up and Mummy needs her computer back so she can do things.  I'll leave you with a cute picture of Pumpkin and myself.  You might have seen it before, but it's important to remember Pumpkin.  Mummy got this printed on a canvas and is going to hang it on the wall so we can always remember him <3
Until next time!
~Basil 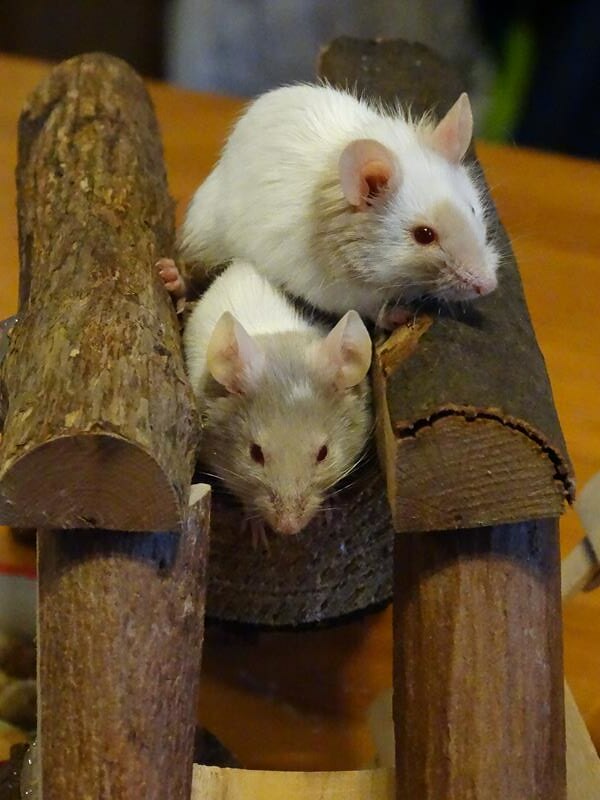